SAN FRANCISCO — The first indication that #FlipMyFunnel would be an unconventional conference came even before entering the downtown building. Curious onlookers were stopping along the sidewalk to stare at a strange sight. “Protesters” carried signs with slogans like “Lead Generation is the Way” and loudly chanted: “More Leads, Not Less!”

They had reason to be upset. The whole idea of the #FlipMyFunnel movement is to embrace an Account-Based Marketing view of the world — and bury the belief that leads are all-important. In fact, conference attendees were invited to place artificial roses in front of little tombstones at a makeshift Lead Graveyard.

So, yes, all of the play-acting was a little corny. But there also was no denying that the theater made a visually striking point. This was about a much different way of marketing and a complete break from the past.

Most of the few hundred people who gathered Thursday either were already true believers in Account-Based Marketing or serious about learning more. The take-home message for ABM: accumulating the greatest volume of leads possible is a fool’s errand. Instead, it’s much more effective to focus on aligning sales and marketing efforts around the target accounts that are most likely to become your customers.

Hence: Turn that traditional sales funnel upside down and concentrate on key accounts.

While the conference did have elements of a pep rally, the event focus was on moving beyond the hype surrounding ABM and getting real-world insights into how businesses can get started. Sessions took deep dives into the different elements of the ABM playbook: identifying the right companies, the right people inside them, engaging them at the right time and then using the right metrics. Otherwise, your ABM strategy will be all wrong.

And that message was delivered by people who are on the front lines.

“Before we turned to ABM, only a small percentage of the people we were reaching had a likelihood of buying from Invoca,” said Stead, the director of demand generation at Invoca, in one of the day’s main presentations. “We needed to do better.”

Stead explained how Invoca adopted an account-based approach last year and walked the audience through their initial steps. The process of choosing target accounts with the help of predictive analytics company EverString. Finding the right people inside those accounts with Datanyze and LinkedIn. Using LeanData to overcome the challenge of associating leads and accounts within Salesforce so they would have complete visibility into those companies. How they are engaging people in accounts through a variety of channels – email, direct mail, target display advertising, outreach by sales reps. And finally, measuring their results with BrightFunnel.

“Our results were awesome,” said Stead, adding that their pipeline-to-spend ratio increased by 26 times. “That validated ABM for us.”

But she also concluded by saying that Invoca still had much to learn. Megan Heuer, the vice president and group director at SiriusDecisions, echoed that sentiment for all companies. ABM is only in the first stages, she added.

“It’s good to hear from people in the thick of it who still don’t have it all figured out yet,” Heuer said. “But clearly there is a pathway to success. It’s great that Julia had such great success in just the first three months. But for most businesses, this is a journey.” For instance Jim Williams, vice president of marketing at Influitive, made it clear that he was no ABM expert. Instead, he described himself as an “ABM experimenter.” He described four recent targeted campaigns his team had run that focused on a high level of personalization — a hallmark of Account-Based Marketing. One of them received a lot of buzz at the Dreamforce conference last fall.

Influitive, an advocacy marketing company, put a “bounty” out on the CMOs that they wanted to meet. They posted photos of the executives on their website wearing black cowboy hats. If the CMOs were “brought in” to their western-theme booth, there was a cash bonus. It resulted in four closed-won deals – more than covering the $1,600 they paid out. Call it an interesting experiment.

And ABM also requires an old-fashioned, human touch. Jessica Cross, the director of audience marketing at EverString, outlined how the campaigns they run are geared to say something very specific that speak to individuals.

By the way, no actual leads were harmed during the day-long conference. For all the lead-bashing that was going on at #FlipMyFunnel, nobody was suggesting that they don’t matter. But the more nuanced message is that the focus needs to be on the smaller number of leads inside coveted accounts. And if you’re counting MQLs, added LeanData CMO Adam New-Waterson, you are wasting your time. That won’t drive revenue for your company.

But the truth of the matter is that there are few rigid rules to ABM. The space is so new that everyone is still trying to decide what works best.

“Account-Based Marketing has yet to be fully defined, fully grasped, fully understood,” Vajre said. “The only way all of that will happen is if we work together to make that happen.” 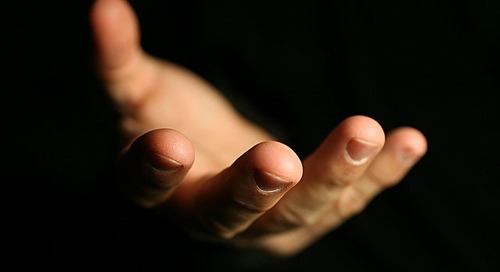 Add value to someone’s life before you try to sell them something. That’s Business 101, right? And that str... Here’s the thing about pendulums. They swing back and forth. It’s just what they do. Grandfather clocks. Am...