It had been nearly a year since Adam Brophy first reached out to the tech executive Adam New-Waterson with an introductory email. For weeks and eventually months afterward, Brophy then peppered the chief marketing officer with emails. They exchanged social media messages on Twitter and LinkedIn. There was even a product demo.

But still, no deal.

That was when Brophy, the sales development team lead at the content marketing platform Uberflip, received an intriguing Tweet from Waterson, who is the marketing head at LeanData. It read: “This is how I feel about our relationship.” There was a photo of a buck standing in the woods, warily looking backward.

“He was making a joke about being hunted,” Brophy said. “It’s true that he almost became a personal vendetta for me. I think every sales rep has that one lead, one prospect, one company where you’re just not going to give up until you finally make it happen. It was an obsession to make him become a customer.” CMOs can feel like deer in the forest during hunting season. They’re constantly being stalked by a small army of determined sales reps. New-Waterson, for one, has become adept at hiding from their prospecting efforts. But Brophy was different. He flushed New-Waterson out into the open.

“When you’re getting a hard sell, it’s very easy to say, ‘I’m not interested,’” New-Waterson said. “But when someone is so focused on creating a real relationship where they’re just trying to make me a better marketer, then that gets me interested.”

But as Brophy would find out, bagging this particular prey would take finesse . . . and patience.

Brophy joined Toronto-based Uberflip as a Business Development Rep in 2014. As he began exploring companies that might be a good fit for Uberflip’s content management product, he identified LeanData as a potential target. So he noticed when New-Waterson posted a LinkedIn comment in the spring of 2015 about how he wasn’t a fan of business people overusing the phrase growth hacking “when you’re just doing your job.” Brophy saw that New-Waterson was the new LeanData CMO.

“So I rolled with that and sent him a message about how I saw his post and that I would refrain from calling the Uberflip platform any kind of hack,” Brophy recalled. “I think that poked through all the noise with something that was really timely and sort of relevant.”

A follow-up email from Brophy showed New-Waterson that a great deal of thought had gone into researching the various career stops and how his professional responsibilities had grown sharply in recent years. On one hand, you could say that he had played on New-Waterson’s ego. But this wasn’t about vanity. Brophy had done his due diligence, understood his target and took the extra time. It made him stand out. “He responded that it was a great email and he was going to show it to his sales team,” Brophy added. “It was a nice little pat on the back for me.”

In fact, it’s really hard to get New-Waterson’s attention. Like all marketers, he’s pressed for time. And New-Waterson believes in the “audience of one” philosophy of prospecting. Any outreach must be personalized. If you write him a generic message, he will add you to a filter that ensures all of your future emails will never reach his active inbox.

Also, if you want to sell him on a product or solution, you better tailor your pitch specifically to his needs. Brophy failed to do that when New-Waterson agreed to a demo several months later. He wasn’t shy about letting Brophy know that it was an unproductive 30 minutes listening to an unfocused presentation.

“I thought I had blown it,” Brophy said. “He’s a tough guy to sell. He knows his marketing technology. I learned a lesson about making sure to show only what’s important to your prospect. I guess I could have quit right there and put my tail between my legs. But I emailed him and said essentially: ‘What could I have done better?’ Looking for that feedback played well with Adam.”

Brophy kept working to build a relationship between the two companies. Hana Abaza, Uberflip’s vice president of marketing appeared on a LeanData webinar. New-Waterson was a guest on the ContentPros Podcast, co-hosted by Uberflip Co-founder Randy Frisch.

When Brophy was promoted to the head of Uberflip’s BDR team, he even used New-Waterson as a training tool. He would pretend to be the LeanData executive in mock discovery calls with new team members.

It wasn’t all pain, though. There was plenty of back-and-forth playfulness on social media. For instance during a second demo call, Tyler Ryll, Uberflip’s senior client success manager, talked about not having to be a “rocket surgeon” to understand a point he was making. New-Waterson instantly Tweeted out the line in the middle of the demo, and it became a running joke between the two companies.

“Not one single touch was a call,” he said. “I never picked up the phone and interrupted Adam’s day. Ever. I don’t know if that’s the greatest message to send to BDRs because they have to make phone calls. But I think the real message is that you have to communicate with your prospect on the medium that they prefer.”

In April, Brophy was growing confident that the timing was right for the deal to happen. He wanted to do something special when New-Waterson agreed to buy. So when LeanData did sign, Brophy was ready. He punched out a Tweet to New-Waterson with an illustration of a trophy buck hanging on a wall . . . wearing a signature Uberflip headband.

“I had been chasing this guy for so long and for me it had become that prize deer,” he said.

By the way, Brophy is not a hunter. He can’t imagine hurting animals. And in the grand scheme of business, this was just one, relatively small deal. But Brophy does believe there are larger lessons that any sales rep can take away from this particular buyer’s journey.

“Persistence doesn’t have to be pestering,” he said. “If you can find a way to add value, be super-relevant to your prospect and engage with them in a light-hearted way, you’re going to find a lot of success. It doesn’t have to be simply picking up the phone and calling them every single week. Every deal is not going to have a tightly wrapped bow around it and come in with the average sales cycle. But if somebody is a good fit for your product, you have to stay on it.”

And you just might get your deer, uh, deal. 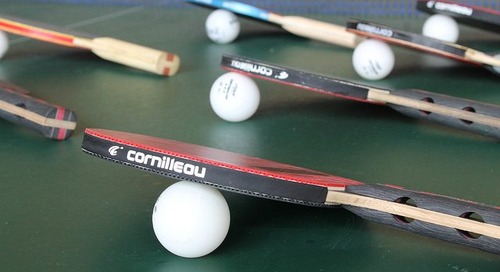 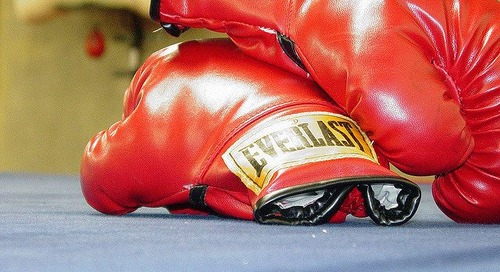 Ladies and gentlemen, welcome to the main event! The bout you’ve all be waiting for is about to begin. In t...