Home » Routing Rules! LeanData's Sales and Marketing Blog » Up, Up and Away: Skyscrapers as a Bubble Indicator
× Share this Article Venture capital continues to pour into technology startups. There are now enough billion-dollar private companies – the unicorns – to start a stampede. And everyone wonders the same thing: How sky-high can it go?

How about skyscraper high?

Tech-fueled San Francisco has seen a boom in construction projects, and the centerpiece is the Salesforce Tower. When completed, the steel-and-glass marvel will dominate the city’s fog-draped landscape – eventually rising 1,070 feet. It will be the highest building west of the Mississippi River.

“It’s a completely unsustainable dynamic. I have no qualms about saying that it’s highly bubbly.”

And what, you ask, does a really tall structure have to do with the red-hot tech economy? A lot, according to Vikram Mansharamani.

Consider him a bubble forecaster. A Yale professor and author, Mansharamani has a knack of connecting dots that might not appear related. It’s why LinkedIn recently listed him No. 1 on its Top 10 financial writers of 2015. His book “Boombustology” examines past financial busts and explores shared characteristics that can be used to spot future bubbles before they burst.

One such leading – or maybe we should say soaring – indicator is the building of skyscrapers. It turns out that the competition to build the world’s tallest buildings eerily has been timed to legendary economic crashes.

The most famous occurrence was a three-tower race in New York (eventually won by the 1,250-foot Empire State Building) that began on the brink of the Great Depression. Other examples of record-setting skyscrapers going up on the eve of financial downturns include Kuala Lumpur’s Petronas Towers in 1997 (Asian financial crisis) and Dubai’s Burj Khalifa in 2010 (global credit crunch).

So why did they prove to be architecture’s versions of canaries in the coal mine? Canary in a coal mine

Mansharamani said towers are inherently speculative ventures. Shovels break ground when times are flush and are built over many years – all on the promise that tenants will come. They’re also bankrolled with easy money when credit is readily available. But the biggest factor is overconfidence.

“Anytime you’re talking about the tallest in any category, it’s all about hubris,” Mansharamani said.

His interest in boom-bust cycles began in 1989 when, as an intern at investment bank Bear Stearns, he watched the Japanese bubble peak and burst. Then he shook his head with continuous wonder at the Asian financial crisis, the dot-com bubble, the housing crisis and so on.

“As I watched this dynamic unfold again and again, it seemed clear to me that markets weren’t completely rational,” Mansharamani said. “Yet everyone seemed to preach that they are and sincerely believed that bubbles were not predictable. From my perspective, they may not be predictable about when they’re going to burst, you can tell when you’re in one. You don’t have to wait until it’s over.”

For instance, he was so certain a housing bubble was inflating in 2005 that he and his wife sold their home and rented for a few years – not buying again until after it popped. “I think you can see these things,” he added.

His nuanced book discusses how bubbles are not just creatures of economics, but rather many different factors including psychology. Mansharamani has come to see the wisdom of Mark Twain, who wrote: “Although history rarely repeats itself, it often does rhyme.” The bubbles he studied were all marked by an infectious sense of exuberance and invincibility that manifested itself in ways such as tall buildings and record art prices – another indicator Mansharamani has written about extensively.

He sees worrisome signs in Silicon Valley, including the emergence of a new breed of venture capital investors such as hedge funds. Mansharamani calls the arrival of such “amateurs” a classic, late-stage boom trait.

“When you enter any new, great era of innovation, there’s a lot of excitement,” he said. “The problem is the fear of missing out begins to run rampant and you end up having a lot of companies that will never, ever justify their valuations. I think the number of unicorns tells you a lot. . . . It’s a completely unsustainable dynamic. I have no qualms about saying that it’s highly bubbly. I’m not saying explicitly that it’s a bubble. It might be small enough and not connected throughout everything (in the economy) where it can create a snowball effect.”

Mansharamani points out that the skyscraper theory has nothing to do with Salesforce itself. He notes that the cloud software behemoth only will be the primary tenant of the tower that will bear its name. Also, Salesforce CEO Marc Benioff has been among the business leaders loudly criticizing the billion-dollar-plus class of companies for being unwilling to prove the accuracy of their private valuations by going public.

“The unicorn mania that’s going on, that’s dangerous for our Silicon Valley economy,” Benioff recently told Bloomberg TV. He also said: “I don’t think a day goes by today that I don’t get a call of a company raising money at a billion dollars or more. And this is just, you know, unheard of . . . It’s become a self-esteem issue for these entrepreneurs.”

For Mansharamani, the tower is a warning sign because of what it it represents.

“The skyscraper says that hubris, easy money and speculative behavior is alive and well,” he said.

In fact Mort Zuckerman, the executive director of Boston Properties, which is one of the developers, has said the Salesforce Tower will be San Francisco’s iconic building. “We are committed to making it the reference point from which all other building designs will be measured,” he said in a promotional video.

Mansharamani ended his book by cautioning that the only thing that ever will be certain is uncertainty. But, he concluded: “Remember that despite the allure of ‘it’s different this time’ explanations, it’s usually not different.”

By the way, the Salesforce Tower is scheduled to open in 2017. 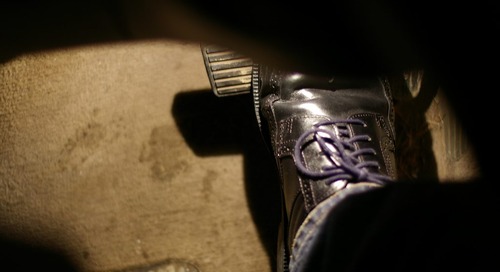 Tapping the Brakes in Silicon Valley

When cloud software company Atlassian celebrated a banner IPO this month, there was a noticeable sigh of re... The Backstory of Account-Based Marketing

Dinner parties usually are where good stories are told. But here’s a case of where one of the best stories ...